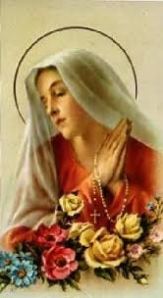 Our Lady of the Most Holy Rosary

I can’t tell you how many times I’ve spoken to persons who insist on “going to the Source when in prayer,” as opposed to employing the profound intercession of Our Lady, Mediatrix of all Grace and Mercy.  The great Saint Louis de Montfort explains so eloquently how each of the Three Divine Persons has freely chosen to become dependent upon Mary (again, I repeat “freely chosen,” for, this “dependence” should not, in any manner, be construed as “necessary,” as though Mary were some type of supreme goddess, upon whom even the Most Holy Trinity would be dependent; rather, Mary is but a creature, whose many particular graces were merited in view of Christ’s passion, which, as we know, transcends both space and time).  The Father, Son and Holy Spirit have freely chosen to associate Mary with and in their most marvelous works.  For instance, the Eternal Father chose to become dependent on Mary’s fiat when He dispatched the Archangel Gabriel to announce to her the marvelous vocation to which God had called her.  Technically, Mary could have chosen to refuse God’s plan for her as the Mother of the Redeemer, for, this would have been a possible exercise of her free-will.  Likewise, God the Son chose to become a little child and to unreservedly entrust Himself to her maternal care throughout the entire duration of His Childhood and Adolescence.  Finally, the Holy Spirit freely chooses to associate Mary in His work of the distribution of Grace, to such an extent that not a single grace that comes from God comes to us but through the willed intercession of Mary, Mediatrix and Dispensatrix of all Grace and Mercy.

These truths regarding the absolute efficacy of Mary’s Maternal Intercession and the Lord’s inability to refuse His Mother’s requests is beautifully and most powerfully illustrated in the profoundly moving story below.  It is my earnest hope and prayer that the experiences of this Catholic priest, who had a near-death experience, was initially condemned to hell, and was then saved through the intercession of the Blessed Mother may ignite the flame of Marian devotion in the hearts and souls of all who view it.