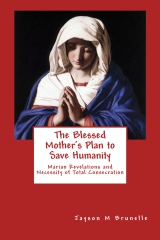 The Blessed Mother’s Plan to Save Humanity: Marian Revelations and the Necessity of Consecration by Jayson M. Brunelle, M.Ed., CAGS

Description: Humanity is both a witness to and a victim of a cosmic battle taking place between “the Woman clothed with the sun” and the “huge Red Dragon,” the ancient serpent who is the devil and Satan. The Blessed Virgin Mary, Mother of God, has been appearing in every continent and in virtually every nation throughout the world to warn of impending chastisements to befall humanity if it does not return to God with faith, prayer and penance. The fourth edition, revised of this book outlines the blueprint for the Blessed Mother’s plan to save humanity.

In short, the Blessed Mother has revealed that the 20th Century, in particular, was entrusted to the dominion of Satan. God, in His providence, allowed Satan to exert great influence and power over this period of history, and within the span of 100 years or so, humanity has become a cesspool of impurity, blasphemy, hedonism, materialism, unbridled capitalism, communism, Marxist atheism, war and rumors of war, and so on. By studying, reflecting upon and comparing key Church-approved messages and secrets, we can trace God’s providential and salvific plan, a plan that places Mary at the head of God’s cosmic battle with Satan for souls, and entrusts her with the task of leading as many souls as possible to her Son, Jesus Christ, acting according to her three-fold function as Co-Redemptrix, Mediatrix and Advocate for the People of God. And while it is true that God is quite angry with this perverse and wicked generation that has so far strayed from His path of righteousness and love, it is no less true that any chastisement that may come will only come as a result of God’s infinite love for humanity and each soul in particular, and out of a desire to purify the Church, the world and each of His beloved children.

Moreover, the final outcome has already been foretold, and we have every reason to hope, for “In the end, [Mary’s] Immaculate Heart will triumph,” and this will coincide with a new, second Pentecost, and the return of Christ to finally establish His glorious reign of peace, love, justice and holiness on earth, bringing to fulfillment that which we pray for in the Our Father prayer, “Thy Kingdom Come, Thy Will be done, on earth, as it is in heaven!”

This book serves as a marvelous resource for Catholics attempting to practice their faith and live their baptismal vows, as well as the promises made in their consecration to Mary. It contains, among other things:

Available as paperback and ebook (Kindle) from Amazon

Consecration to Jesus Christ, through Mary and Joseph: Theology of a spirituality after the Holy Family by Jayson M. Brunelle, M. Ed., CAGS.

Description: “To be Hers is to belong perfectly to Jesus Christ.” Few persons realize the great role the Virgin Mary plays in the sanctification of souls. As spiritual Mother of the Mystical Body, Mary, together with the Holy Spirit, has the task of forming Christ in souls through divine grace. The great Marian Saints Louis De Montfort and Maximilian Kolbe, continuing and further developing a 2000-year tradition of theologically sound and Christocentric devotion to the Mother of God, consistently taught that our response to Mary’s role as Spiritual Mother should be nothing short of total consecration to Her. This book thoroughly explores the firm theological foundations for this sublime devotion of total consecration, focusing on Mary’s Spiritual Motherhood as it is expressed and manifested through Her three-fold function as Co-Redemptrix, Mediatrix of all grace, and Advocate for the People of God.  This work stands out among the many books written on consecration to Mary in that it takes into serious consideration the often neglected role of St. Joseph in this devotion, thereby exalting the entire Holy Family of Jesus, Mary and Joseph, or the Earthly Trinity, as the basis for a universal spirituality, especially suited for the laity.  With an understanding of (1) St Joseph’s spousal union with Mary as the epitome of perfect consecration to Jesus through Mary; (2) his role as Spiritual Father and Patron of the universal Church; (3) and finally, the universality of the call to holiness, and the corresponding universal spirituality that this devotion offers, the reader will be brought to an entirely new awareness of and appreciation for the profundity of this most sanctifying devotion of perfect consecration to Jesus, through Mary, in the spirit of St. Joseph.  A new prayer of total consecration to Jesus, through Mary, is included. Available as paperback and ebook (Kindle) from Amazon. 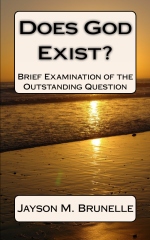 Description: Does God exist? Are there any arguments to prove the existence or non-existence of God? If the God of Christianity is all-good and all-powerful, how is it that evil exists? How are we to understand the many different Christian denominations, never mind the other great world religions, when all of these claim to have a monopoly on the “Truth?” Are there any arguments for the divinity of Christ? What makes Christianity so unique, when compared with other belief systems? How can Christ be present with His Body, Blood, Soul and Divinity, in the confected host and in the consecrated wine? The above questions are some of the examples of questions that will be addressed in this brief examination of whether God exists. As you can see, some of the questions are philosophical, whereas some of the other questions are theological. Still others are quite practical. Drawing from Sacred Scripture and Tradition, as well as the Church Fathers and other great Christian writers, in this book I will examine the questions raised in relation to the outstanding question, “Does God exist?” Available as paperback and ebook (Kindle) from Amazon. 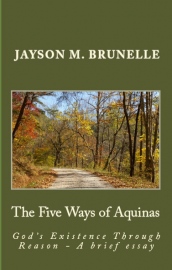 Description: In this brief essay, the author elucidates, in language easily accessible and understandable by all, the famous five ways of St Thomas Aquinas. These five ways have been used by apologists for centuries to demonstrate that God’s existence can, indeed, be logically proven via sound philosophical argumentation.  With explanations of terms first proposed by Aristotle and later adopted by Aquinas, the author systematically breaks the arguments down into contemporary language that does not require a background in Scholastic Philosophy to be readily understood.  Available as paperback and ebook from Amazon

Simply click here to be taken to Jayson Brunelle’s Author Page at http://www.amazon.com.