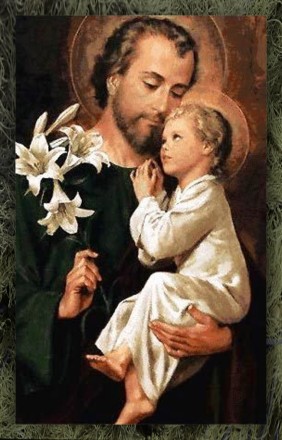 On this marvelous Solemnity of St. Joseph, Spouse of the Blessed Virgin Mary and Patron of the Universal Church, it is critical that we turn our attention to St. Joseph at this pivotal moment in our nation’s history.  St. Joseph is, for each of us, the perfect example of one who is entirely, whole-heartedly devoted to Christ Jesus, and this through his perfect devotion to Mary, the Mother of God.

Indeed, we can ask ourselves, what is the essence of total consecration?  Certainly, the great Marian Saints Louis Marie de Montfort and Maximilian Mary Kolbe made every effort to underscore the totality and unreserved nature of this “gift” of one’s self to the Blessed Virgin via the use of such expressions as “slave,” “possession and property.”  While these beautiful phrases presented by the Marian “giants” certainly convey the radical extent to which they, themselves, went in offering themselves – body and soul; intellect and will; all their goods, both interior and exterior; and even the value of all of their good deeds and merits: past, present and future; all for the greater glory of God, in time and in eternity – it is the conviction of this author that St. Joseph, who is, in fact, the Patron of the Universal Church, attained this lofty privilege precisely through the radical breadth and depth of his sanctity, which was a direct consequence of his virginal espousal of the Immaculate Heart of Mary: or, in other words, the single most perfect consecration to Jesus through Mary.

Christ, our Lord, has called each of us into a most radical intimacy of life with Himself, as He states in John 15:15, “No longer do I call you slaves, for the slave does not know what his master is doing; but I have called you friends, for all things that I have heard from My Father I have made known to you.”  Moreover, while Christ is the sole “Mediator” between the Heavenly Father and humanity (1 Tim 2:5), Mary is the sole “Mediatrix” between us and Christ: ” … it is right to say, that nothing at all of that very great treasury of all grace which the Lord brought us–for ‘grace and truth came through Jesus Christ’ [Jn 1.17]–nothing is imparted to us except through Mary, since God so wills, so that just as no one can come to the Father except through the Son, so in general, no one can come to Christ except through His Mother” (Leo XIII, Octobri mense adventante).

Furthermore, in a little-known, oft overlooked, yet profoundly rich passage from the Book of Sirach, we find Created Wisdom (whom the Church identifies as the Blessed Virgin Mary, as Christ Jesus, Who is the “Wisdom” of God, is clearly distinct from “Created Wisdom,” as Christ is God, and, as the Creator, “through Whom and for Whom all things were created” He cannot, Himself, be “created”) singing her own praises, which resonate and prophetically depict the “Espousal” model of Marian Consecration, so beautifully illustrated in the lives of Mary and Joseph:  “And she will meet him as an honourable mother, and will receive him as a wife married of a virgin. [3] With the bread of life… she shall feed him, and give him the water of wholesome wisdom to drink: and she shall be made strong in him, and he shall not be moved” (Sirach 15:1-3).

Lastly, as Christians, we are called to imitate Christ in all the Divine Mysteries of His life, His Holy Infancy notwithstanding.  Thus, just as Christ became a child and entrusted Himself unreservedly to the care of Mary and Joseph, so too ought we to entrust ourselves to these most noble of all Guardians.  Thus, we are called to look to Mary as our Spiritual Mother (a role that she carries out as Co-redemptrix, Mediatrix and Advocate), as a “wife married of a virgin,” who shall feed us with the Bread of Life, her Eucharistic Son, and our sister in the Mystical Body of Christ!

Let us, then, pray to St. Joseph on this, his Solemnity, that he might enlighten our minds and inflame our hearts with an ever-deepening understanding and comprehension of the tremendous role of the Immaculate Heart of Mary, in the economy of salvation and the